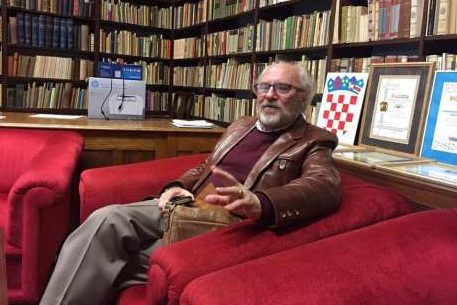 (Book written in the Croatian language)

With the quiet, subdued, confused and detached exterior of Bela Nemeth throughout this novel the reader cannot shake off the constant feeling of suspense, of expectation, as to when Bela will, finally, lash out at the world around her and pour out the fire of anger and brilliance that burn within her. Melbourne (Australia) based Vladimir Jakopanec has masterfully built into this novel a constant feeling of suspense even though the plot is simply not of a Suspense and Thriller genre but rather a genre of Literary Fiction evoking deep thought throughout. In this novel the elements of psychological profiling of its two main characters hits a particularly sobering note of cruel paths and destinies life can dish out.

The term requiem refers to the Roman Catholic mass held for the dead. Requies means rest. In a nonreligious context the word refers simply to an act of remembrance. The word in the title of Vladimir Jakopanec’s 2019 book title – “Requiem for Bela Nemeth” – aptly fits the atmosphere of this suspenseful, rather haunting, touching, easily read novel in which the lives of two people of Croatian descent in Australia, Bela and Milan, are gelled together by a fundamental need to belong, unarticulated but fundamentally present love for each other, despite often tragic life’s circumstances that make that belonging seem like silent floating on a rowboat without oars, carried by the currents and torrents of forces of life that are stronger than either of them. The rudder that steers Bela’s life are the consequences of abuse she suffered as a child from her parents, particularly her father whose methods of torture and abuse fit more into the harsh and crude 18th or 19th century social gutters than into the 20th, in which she was born and raised.

Vladimir Jakopanec in this his third novel presents us with a portrait of Croatian emigrant life in Australia that takes us into the malaise of social isolation resulting from child abuse, frustrated love for the Homeland, nostalgia that drives one to live from time to time in both the “new” and the “old countries”;

it explores love for another human being and the constancy of respect underlying it;

it explores ponderings upon death and fears that almost paralyse in the face of it;

it explores the economic downfall and resulting hardships of everyday life within former Yugoslavia, which drove multitudes to emigrate;

it explores compromises made in living parallel lives in emigration;

it explores the camaraderie and naturally emerging supports that gel migrant communities into a breathing energy to meet life’s challenges in foreign countries head on;

it explores loss and tragedy of unrequited love, thrilling love between a man and a woman that could have been but was not;

it explores the workings of the communist Yugoslavia Secret Police UDBa on Australia’s soil, pursuing the vilification and destruction of the Croatian spirit for freedom of Croatia by any means;

it takes us into the horrors of the 1990’s war in Croatia and Bosnia and Herzegovina, focusing with some distressing detail on violent and deadly rapes of women by the Serb aggressors.

The novel, in its frank accounts and vignettes is a tenacious set of socio-political elements and factors that shaped and sustained within Australia the Croatian post-World War Two immigrants and ultimately made them a willing partner in Croatia’s bloody path of secession from communism and establishing a free, democratic state.

The pulse of the novel is elderly Bela, with dementia sneaking in and out like a thief – unexpected, sudden and cruel.  The torrents of ungovernable thoughts that plague Bela are palpable in the authors skilful interjections of taking the reader into her abusive childhood and youth, paternal control and fear-instilling, Bela is a product of. The reader is taken on a journey back through Bela’s life of being subdued, of cruel parental abuse, which, undoubtedly carved deep scars of rebellion in her and, ultimately, her inability to give herself to any man or human being – fully. As the puzzle pieces of Bela’s history, and the history of her life in Zagreb (Croatia), in Melbourne (Australia), in the war zones of 1990’s war in Croatia and Bosnia and Herzegovina fall into place through the book, so too does a subtle history of the major ideologies of the 20th century Croatia and the love harboured and defended for her freedom over many decades outside its borders – in Australia (in the diaspora). Indeed, this novel portrays the struggles of a multicultural Australia and families within it that often hover through life in relative social isolation, without deep personal friendships that usually are the roots of lasting spiritual safety for any migrant.

The backbone of Bela’s ultimate survival in life is Milan, with his loyalty to her despite her “faults” and wild escapades while coming in and going out of his life like a tornado that had no set destination, just an ingrained force compelling it to wear itself out!

While Bela with her parents arrived in Australia from Croatia as a young woman, Milan migrated to Australia (Melbourne) as child with his parents from Croatia and grew up surrounded by the cultural and moral tokens of Croatian culture in a foreign country (Australia); the culture that was at the time deeply different to the mainstream one he migrated into. Whether the reality of growing up and living between and with two differing cultures had reaped its harvest into a fundamentally insecure and socially relatively isolated person in Milan, who by all accounts of his parents’ dedication to build a solid and safe home in Australia grew up a loyal man, is a question that imposes an affirmative conclusion, psychologically. Milan grew into an adult man whose greatest achievement in life is seen through having someone to belong with under the same roof. His love for Bela was profoundly deep – unconditional to the core despite Bela’s restlessness and often crazily adventurous life-episodes away from him. His contentment with life is actually of quite simple nature – Bela sought refuge under his roof in her older age, provided no visible or palpable signs of love for him and yet, he felt he was the happiest and the most content man on earth, it seems, because she belonged there with him – in his life , in his living.

This book is a delight to read not because of the implied life-shaping forces within it that can be found in anyone’s life, but because it brings to the reader a personal, an eloquently  portrayed closeup picture of Croatian suffering for freedom as a nation.

The book in printed version can be purchased online from http://www.webkjnizara.hr ; http://www.zagrebcroatianbookshop.com.au ;